All inclusive playground receives grant for $50,000 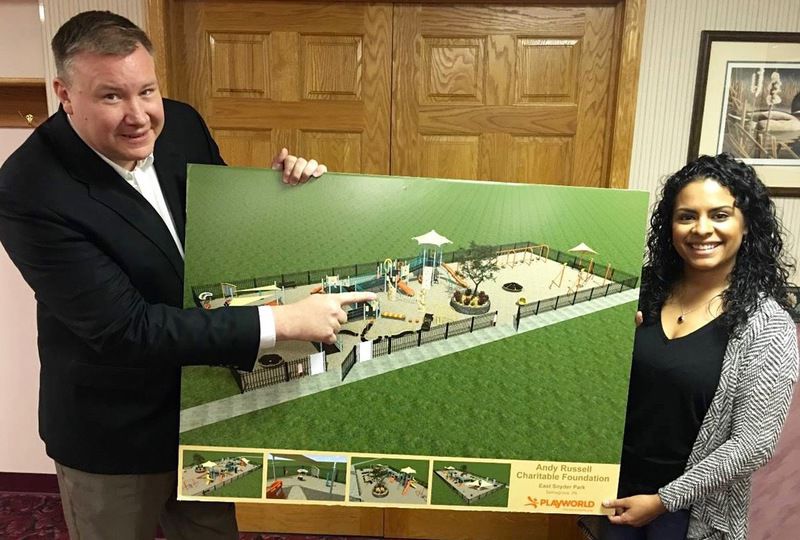 SELINSGROVE — An anonymous $50,000 challenge grant has been received by the Andy Russell Charitable Foundation to officially launch the beginning of a $475,000 fund drive focused on building an All Inclusive Playground at the existing East Snyder Recreational Center in Selinsgrove. When constructed, the playground will specifically address the needs of individuals who may be autistic, have intellectual disabilities, hearing or sight impairments, Down Syndrome, cerebral palsy, spina bifida, are dependent upon wheel chairs, or have other life altering disabilities.

The design, by Playworld of Lewisburg, a division of Play Power, Inc., will also accommodate the participation of typical children who want to play along with siblings while providing positive and healthful challenges for all at their own developmental level. The playground will also provide the opportunity for parents who may be disabled to also interact with their children on an unencumbered and mutually enjoyable fun basis.

Daniel E. Hooper, market manager/vice president, First National Bank, and chairperson of the Andy Russell Foundation Advisory Council, made the announcement of the challenge grant saying “this magnanimous contribution gets our fund drive off to a very positive and exciting beginning and really sets the tone for the entire project. Even though we announced the start of the playground project last summer we’ve largely been laying the ground work for the major campaign and this gift, from a very special friend, now propels us to a fast and spectacular start.” Ground breaking is scheduled for early spring with completion targeted for mid summer, 2018, according to Hooper.

In his announcement, Hooper said that the All Inclusive Playground will be the first of its kind in Pennsylvania. “There are no other fully dedicated All Inclusive Playgrounds in the Commonwealth and, of particular interest, is that the playground design has been finalized and received the endorsement and accreditation of Let Kids Play!, a nationally recognized consulting firm whose stamp of approval is critically important. In their letter of approval they state ‘Your playground meets or exceeds the American with Disabilities Act regulations’ which is a significantly important factor for donors and users,” Hooper noted.

Included in the playground are 15 key features specifically designed to accommodate those with disabilities or handicaps and which will provide a rich play space where children can grow and learn through physical, sensory and social experiences. It will offer graduated levels of challenge in order to ensure that children of all ages are actively engaged. Included is a service dog park so those with service animals may bring them along knowing their companions are close by and safe.

“As we now begin the public phase of our fund campaign our focus will be on major sponsorships, naming rights, and gifts for the individual key pieces of equipment. Included will be a raised planter bed with a tree and planted flowers designed to be a natural seating area as well as walkways, fencing, and other attractive safety features. Happily we’ve already received a number of in-kind donations to help with the infrastructure so we’re on track and looking forward to contributing a wonderful All Inclusive Playground to the greater three county community this coming summer,” Hooper commented.

The Andy Russell Charitable Foundation is a nonprofit organization founded in 1999 whose primary mission is to fund children’s causes directly related to the critical issues of health, nutrition, mental health challenges, physical disabilities and impoverished circumstances. A former star linebacker for the Pittsburgh Steelers, Andy and his wife, Cindy, are frequent visitors to the Susquehanna Valley and have supported other local charities and causes in a place they refer to as their third most favorite area and home base. “We have many friends here, enjoy the community, and are especially appreciative of the reception we’ve enjoyed from so many over the past dozen years. Being part of the All Inclusive Playground endeavor is a modest way for Cindy and me to give back to a community we’ve come to love and value and we look forward to working with many volunteers and supporters of the playground,” Russell said.