Who is Andy Russell? 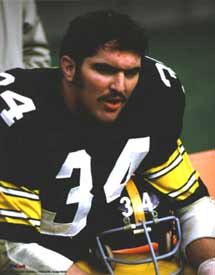 Andy Russell played his rookie year for the Pittsburgh Steelers as a linebacker in 1963. During 1964 to 1965, Andy was deployed to Germany to serve in the Army as a Lieutenant. He returned to play for the Steelers from 1966 to 1976. Andy graduated from the University of Missouri with a BS in Economics and an MBA.

Andy is the former Managing Partner of Laurel Mountain Partners and an investor in Liberty Waste Tire, companies located in Pittsburgh, PA. He is the founder and former chairman of Russell, Rea and Zappala, an investment banking firm.

NFL Career: All Pro Rookie Team in 1963, All Pro or All Conference 7 years, 7 Pro Bowls, (the only linebacker in the NFL to play six consecutive Pro Bowls between 1971 – 1976), Chosen by the NFL Hall of Fame Selection Committee to the NFL All Pro Team of the 70’s. Steelers Team Captain for 10 years – received the Byron Whizzer White Award in 1970, Defensive MVP in 1968 and 1970, Team MVP 1971 Two Winning Super Bowls, 1974 and 1975. One of 33 players named to the Pittsburgh Steelers’ 75th Anniversary All-Time Team in 2007. Representative to Players Association for 2 years, NFL USO Goodwill Tours – Italy and Vietnam during the Tet Offensive, chosen Most Outstanding Player of the USAREUR (U.S. Army Europe) Football in 1964, Served on the Board of the NFL Alumni, member of NFL’s “300 Greatest Players”, and inducted into the Pennsylvania Hall of Fame, the University of Missouri Hall of Fame, the Missouri State Hall of Fame, and the Pittsburgh Pro Football Hall of Fame. Never missed a game in his career of 186-games in the NFL, and Military, College or High School.

Has written and published three books: Beyond the Goalpost, A Steelers Odyssey and An Odd Steelers Journey